Adam Ansorge
starting with stop-motion Legos™ back in 1980-something, Adam has been drawing and animating ever since. He has worked on sets for live-action production, in multiple animation studios performing animation and motion graphics production, one video game company as a level designer, and one marketing agency as a multimedia consultant for pharma-client driven productions, sales pitches, and new business. Graduated Mason Gross School of Visual Arts (New Brunswick NJ, 1998), BFA Film/Video and School of Visual Arts (NYC, 2005) BFA Character Animation. He has been around the academic and professional environments of film and animation production for roughly 14 years and has been assisting and/or directing dozens of projects. Whether it for others or himself, Adam is a "creative" with a background allows him to be an artist as well as a detailed oriented professional. Film and animation festivals of his work have been screened in: The BeFilm Underground, Animation Block Party, Worldfest Houston, Red Stick International, Miami International, Red Bank International, Tel Aviv Animation Festival, ASIFA-East awards show, and Animayo.

20 years of the Dusty Animation Festival 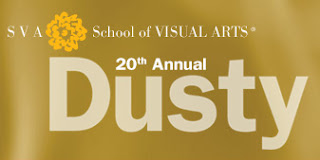 Since last Wednesday, 4.29, I've seen 63 films from the BeFilm Underground Film Festival, 27 from the ASIFA-East's 40th Awards night, and tonight came back from The School of Visual Arts' 20th Dusty Film & Animation Festival having seen 45 animations. That's 135. I'm a tad blind, but all good times:)

At the NEW SVA Theater located between 8th & 9th Ave on 23rd Street,
Reeves Leehman, Chairman of the SVA Film & Animation department declared that this was the largest number of films for an SVA animation screening ever. I may have misheard that, but I would believe it. 45 animated films in a row with only a 10 minute break after the first 2 hours. The show started around 715pm and went on until around 1045pm. Sooooo many films. So many of them so good! Some of the filmmakers I've known for years and it feels so good to have seen their work on the big screen! I need to see some of these films again and soon, so I hope that I can get some links to post to the world in the next post I do here so you too can see them.

Some of the films were sadly incomplete (animatic boards, uncolored animation, unfinished post production). As a thesis advisor, I can see myself getting a tad miffed if one of my students didn't finish their production on time. It reflects on the advisor and I can understand the frustration that comes with that. That said, because I've been there.....making a film in and of itself is not easy when you've got a world of hell and academics all around you. While I would very much like to see every film 100% complete, I give huge amounts of credit to every animator who had a film tonight. The crack of a deadline with an advisor's whip can be deadly and I know that I had more than a few panic attacks at the zero hour when the Dusty deadline was upon me.

If there's any one lesson I learned from the pressure of the festival deadline is that it's not a terrible idea to get helpers, slaves, interns, and (heaven forbid) pay some people to get the job done if you can afford it. This is a student screening, so I expect lots of different approaches to everything and the class of 2009 delivered big time!

I am genuinely a bit blind from the last week of films in combination with tonight at the Dustys. I'll need the weekend to recover, I will continue with some good highlights if I can. Lots and lots of talent was evident in almost everything I saw tonight. Seeing a show like this makes me feel good that so many people care so much about animation. I hope wherever the animators go, they take that love with them into everything they do:)

See the complete list for Thursday 5.7 at the bottom of the page
Posted by Adam Ansorge at 12:40 AM

My most recent whiteboard illustrations: